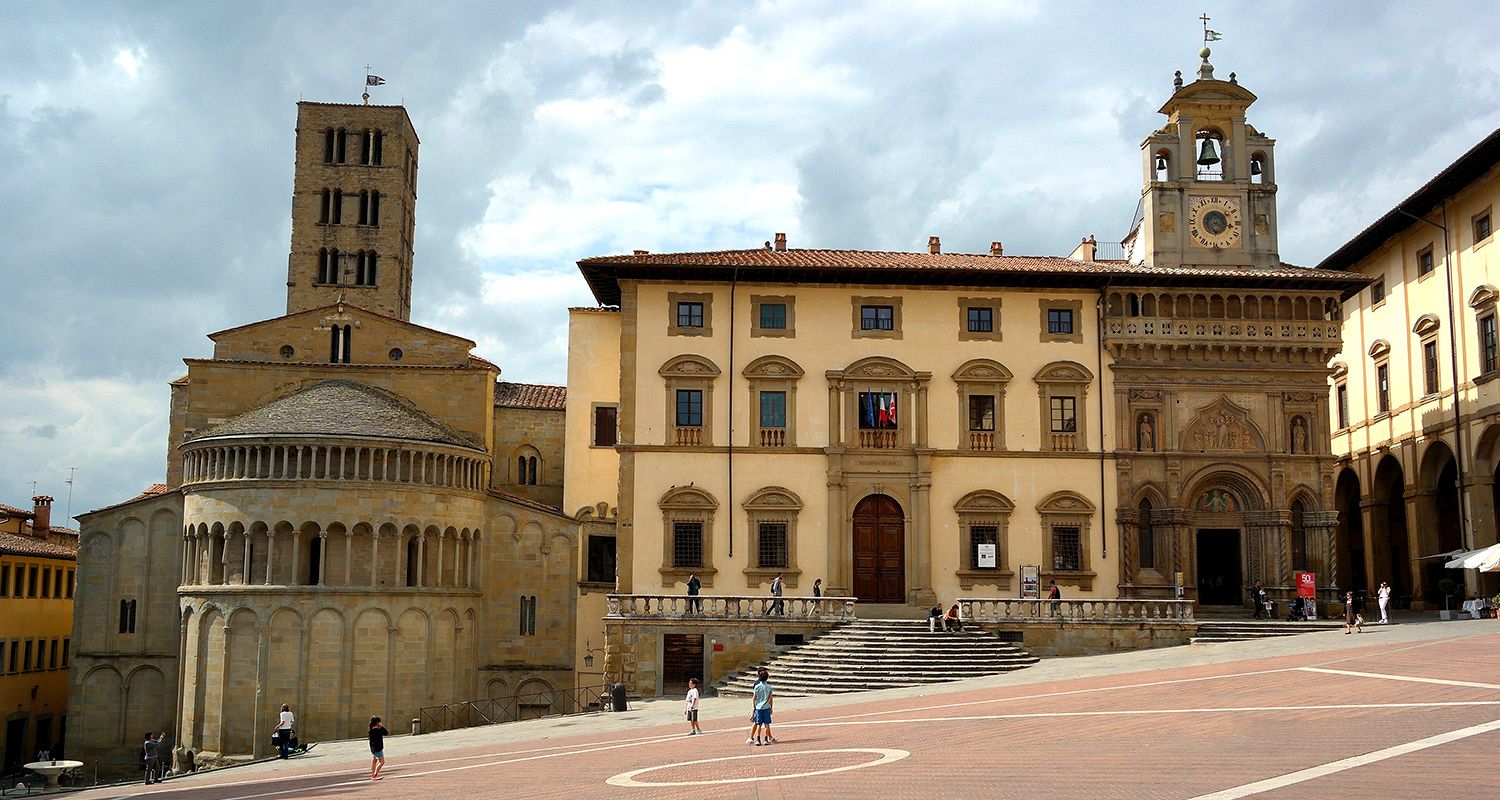 Your driver will pick you up at your hotel
or apartment and he'll drive you to AREZZO.

Arezzo is set on a steep hill rising from the floodplain of the Arno. In the upper part of the town are the cathedral, the town hall and the Medici Fortress (Fortezza Medicea), from which the main streets branch off towards the lower part as far as the gates. The upper part of the town maintains its medieval appearance despite the addition of later structures.
Arezzo may have been one of the twelve most important Etruscan cities, the so-called Dodecapolis. It was described by Livy as one of the Capitae Etruriae (chief Etruscan cities). Etruscan remains establish that the acropolis of San Cornelio, a small hill next to that of San Donatus, was occupied and fortified in the Etruscan period. There is other significant Etruscan evidence, parts of walls, an Etruscan necropolis on Poggio del Sole (still named "Hill of the Sun"), and most famously, the two bronzes, the "Chimera of Arezzo" (5th century BC) and the "Minerva" (4th century BC) which were discovered in the 16th century and taken to Florence. Increasing trade connections with Greece also brought some elite goods to the Etruscan nobles of Arezzo: the krater painted by Euphronios ca 510 BC with a battle against Amazons (in the Museo Civico, Arezzo 1465) is unsurpassed.
Roman piece of pottery from Arezzo, Latium, found at Arikamedu in India (1st century CE), an evidence of the role of the city in Roman trade with India during the Augustan period. Musée Guimet.
Conquered by the Romans in 311 BC, Arretium became a military station on the via Cassia, the road to expansion by republican Rome into the basin of the Po. Arretium sided with Marius in the Roman Civil War, and the victorious Sulla planted a colony of his veterans in the half-demolished city, as Arretium Fidens ("Faithful Arretium"). The old Etruscan aristocracy was not extinguished: Caius Clinius Mecaenas, whose name is eponymous with "patron of the arts", was of the noble Aretine Etruscan stock. The city continued to flourish as Arretium Vetus ("Old Arretium"), the third largest city in Italy in the Augustan period, well-known in particular for its widely-exported pottery manufactures, the characteristic moulded and glazed Arretine ware , bucchero-ware of dark clay, and red-painted vases (the so-called "coral" vases).
In the 3rd to 4th century, Arezzo became an episcopal seat: it is one of the few cities whose succession of bishops are known by name without interruption to the present day, in part because they were the feudal lords of the city in the Middle Ages. The Roman city was demolished, partly through the Gothic War and the invasion of the Lombards, partly dismantled, as elsewhere throughout Europe, and the stones reused for fortifications by the Aretines. Only the amphitheater remained.
The commune of Arezzo threw off the control of its bishop in 1098. Until 1384, Arezzo maintained itself as an independent city-state, generally Ghibelline in tendency, thus opposing Guelph Florence. In 1252 the city founded its university, the Studium. After the rout of the Battle of Campaldino (1289), which saw the death of Bishop Guglielmino Ubertini, the fortunes of Ghibelline Arezzo started to ebb, apart from a brief period under the Tarlati family, chief among them Guido Tarlati, who became bishop in 1312 and maintained good relations with the Ghibelline party. The Tarlati sought support in an alliance with Forlì and its overlords, the Ordelaffi, but unavailingly: Arezzo yielded to Florentine domination in 1384; its individual history was submerged in that of Florence and the Medicean Grand Duchy of Tuscany. During this period Piero della Francesca worked in the church of San Francesco di Arezzo producing the splendid frescoes, recently restored, which are Arezzo's most famous works, but afterwards the city began an economical and cultural decay, that had the effect of preserving its medieval centre.
In the 18th century the neighbouring marshes of the Val di Chiana, south of Arezzo, were drained and the region became less malarial. At the end of the century French troops led by Napoleon Bonaparte conquered Arezzo, but the city soon turned into a base of the resistance against the invaders with the movement of "Viva Maria": this gained the city the role of provincial capital. In 1860 Arezzo became part of the Kingdom of Italy. City buildings suffered heavy damage during world war II.

The Piazza Grande is the most noteworthy medieval square in the city, opening behind the thirteenth-century Romanesque apse of S. Maria della Pieve. Once the main marketplace of the city, it is currently the site of the Giostra del Saracino ("Joust of the Saracin"). It has a sloping pavement in red brick with limestone geometrical lines.

The Gothic Cathedral of Saint Donatus (13th-early 16th centuries). The façade remained unfinished, and was added in the twentieth century. The interior has a nave and aisles divded by massive pilasters. The left aisle has a fresco by Piero della Francesca portraying the Madeleine. Noteworthy are also the medieval stained glass, the Tarlati Chapel (1334) and the Gothic tomb of Pope Gregory X.

Basilica of San Francesco (13th-14th centuries), in Tuscan-Gothic style. Of the projectd façade cover in sculpted stone only the lower band was completed. The interior has a single nave: the main attraction is the History of the True Cross fresco (1453-1464) cycle by Piero della Francesca in the Bacci Chapel. Under the church is another Basilica with a nave and two aisles (Basilica inferiore), today used for art exhibitions. The History of the True Cross or The Legend of the True Cross is a sequence of frescoes painted by Piero della Francesca in the Basilica of San Francesco in Arezzo. It is his largest work, and generally considered one of the finest, and an early Renaissance masterpieces.
Its theme, derived from the popular 13th century book on the lives of saints by Jacopo da Varagine, the Golden Legend, is the triumph of the True Cross - the wood from the Garden of Eden that became the Cross on which Christ was crucified. This work demonstrates Piero's advanced knowledge of perspective and colour, his geometric orderliness and skill in pictorial construction.

Romanesque church of Santa Maria della Pieve. Its most striking feature is the massive, square-planned bell tower with double orders of mullioned windows. The church was built in the 12th century over a pre-existing Palaeo-Christian edifice, and renovated a century later with the addition of the characteristic façade made of loggias with small arches surmounted by all different-styled columns. Also from the same century is the lunette with the Virgin between Two Angels and the sculptures of the months (1216) over the main portal. the interior has a nave and two aisles, with a transept also added in the 13th century. In the following century chapels, niches and frescoes were added, including the polyptych of Virgin with Child and Saints by Pietro Lorenzetti (1320). In the crypt is a relic bust of St. Donatus (1346). Fomr the same epoch is the exagonal baptismal font, with panels of the Histories of St. John the Baptist, by Giovanni d'Agostino. The Pieve was again renovated by Giorgio Vasari in 1560.

Basilica of San Domenico (founded in 1275 and completed in the early 14th century). The interior has a single nave with a Crucifix by Cimabue, a masterwork of 13th century Italian art. Other artworks include a Sts. Philip and James the Younger and St. Catherine by Spinello Aretino and other 14th century painting and sculpture decorations.

Church of San Michele, with a modern façade. Traces of the original Romanesque edifice and the Gothic restoration can be seen in the interior.

After that we'll move to SIENA

Once in Siena you'll immediately notice an ancient and mysterious atmosphere floating through the little, narrow streets and squares. You'll feel as if you've stepped backwards in time. Draped on its three hills, Siena is a very beautiful city to visit, a flamboyant medieval ensemble of places and towers cast in warm, brown, Siena-coloured bricks.
Siena, like other Tuscan hill towns, was first settled in the time of the Etruscans (c. 900 BC to 400 BC) when it was inhabited by a tribe called the Saina. The Etruscans were an advanced people who changed the face of central Italy through their use of irrigation to reclaim previously unfarmable land, and their custom of building their settlements in well-defended hill-forts. Then, at the time of the Emperor Augustus, a Roman town called Saena Julia was founded in the site. The first document mentioning dates from 70 AD. Siena may then have been under the control of invading Gaulish forces - who are known to have sacked Rome in 390 BC. Some archaeologists assert it was controlled for a period by a Gaulish tribe called the Saenones.
The Roman origin accounts for the town's emblem - a she-wolf suckling the infants Romulus and Remus. According to legend, Siena was founded by Senius, son of Remus, who was in turn the brother of Romulus, after whom Rome was named. Statues and other artwork depicting a she-wolf suckling the young twins Romulus and Remus can be seen all over the city of Siena. Other etymologies derive the name from the Etruscan family name "Saina", the Roman family name of the "Saenii", or the Latin word "senex" ("old") or the derived form "seneo", "to be old".
Its soaring skyline is its pride, dominated by the gothic cathedral (Duomo) and the taut needle of the Torre del Mangia and yet the shell shaped Piazza del Campo, probably captures the most attention and fame. It has been seen in films, photographs, and advertising campaigns. The bricks cover the sweetly sloping land underneath and are witness to many events in history, but the most intriguing is the "Palio" horserace, one of the most important things in the life of a Siena native. In the piazza on 2 July and 16 August there is a bareback horse race that was first recorded in 1283, but may have had its origins in Roman military training. On those days mayhem takes over this small town and non-natives can observe local patriotism at its best and worst. Any and everything will be done passionately to bring home the prize. The prize is the "Palio," a banner to be shown off with pride for the whole neighborhood it represents. The duomo (1136 - 1382) is one of the most spectacular in ITALY and one of the few to have been built south of the Alps in full gothic style. In 1339, the Sienese decided to build a new nave to the south with the aim of making the biggest church in Christendom. This plan come to nothing when plague hit the city, killing off much of the population. The uncompleted nave now contains a museum of Gothic sculptur.