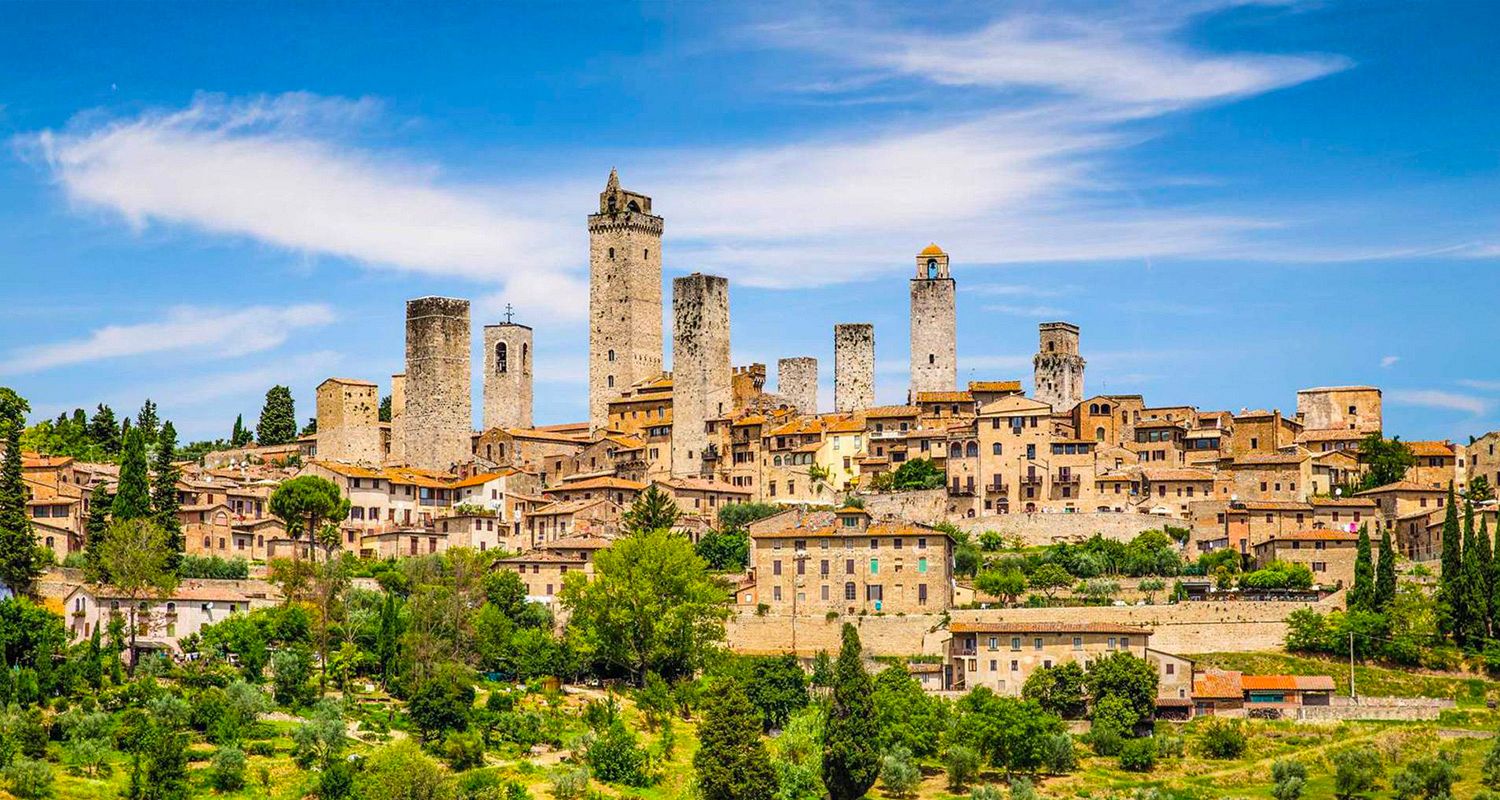 Your driver will take you in this trip through the CHIANTI.

You'll go in the beautiful town of GREVE IN CHIANTI.
Greve in Chianti (the old name was Greve; in 1972 was renamed Greve in Chianti after the inclusion of that area in the Chianti wine district) is a town and comune (municipality) in the province of Florence, Tuscany, Italy. It is located c. 31 km south of Florence, and 42 km north of Siena.
Sitting in the Val di Greve, it is named for the small, fast-flowing river that runs through it, is the principal town in the Chianti wine district which stretches south of Florence to just north of Siena. Until recently it has been a quiet, almost bucolic town because it was, and still is, well off the main roads.
Even in ancient days Greve was not isolated because it was well-connected by secondary roads to the Via Volterrana and via Francigena. Nowadays, it is connected to the A1 between Florence and Rome and the main road between Florence and Siena. The old road network ensured easy access to Florence and to other places such as Figline where its tradesmen and farmers found ready markets for their goods and produce. The modern transportation network connects it to the world at large, enabling it to export great quantities of wine, and import vast quantities of tourists.
The site of Greve and the surrounding territory has been long settled, probably well before the Etruscans and then the Romans dominated the area. Historical documents of the 11th century refer to an ancient monastic settlement on a nearby hill, which is now called the hill of San Francesco. Before the Franciscans established their monastery in the 15th century, an earlier monastery dedicated to Santo Savi had already been built, and also a small hospital. Larger scale settlement occurred in the 13th and 14th centuries.
Although an independent town for most of its history, Greve ultimately came under Florentine control and remained so until the Grand Duchy of Florence was absorbed into the unifited Kingdom of Italy in 1861.
The Franciscan monastery is still at the heart of the old part of the city, as is the triangular main piazza, where a market has been running more or less continuously for centuries serving the nearby castle communities and hamlets.
The piazza is fronted by numerous medieval aged buildings, including the 11th century Chiesa Santa Croce which was rebuilt in 1325 after being burned to the ground, along with the rest of the town, by the Duke of Lucca, Castruccio Castracani. After further renovation, the church, which houses paintings of the school of Fra Angelico, now features a neo-classical facade. In the piazza there is also a monument to the discoverer of New York harbor, Giovanni da Verrazzano (1485-1528), who was born nearby.
In the frazione of Montefioralle is the church of Santo Stefano, with a late 13th century Madonna with Child and a 15th century Trinity and Saints. Also in the hamlet is a house which, according to the tradition, belonged to other explorer Amerigo Vespucci. In the nearby is a Romanesque Pieve with narthexed façade and two mullioned windows.
At 2 km from the centre of Greve is the castle of Verrazzano, sitting on a 348 m-high hill. Built probably by the Lombards, it was a possession of the explorer's family, and in the 17th century was turned into a villa. Of the 13th century manor a tower remains.
In the neighbourhood of the frazione of Panzano is the Pieve of San Leolino, known from the 10th century. The interior houses a 13th century panel by Meliore di Jacopo, a 15th century polyptych by the so called Master of Panzano, as well as works by Raffaellino del Garbo and Giovanni della Robbia.
With the enlargement of the Chianti wine district in 1932, Greve suddenly found itself in a noble wine area. The Chianti region supports a variety of agricultural activities, most especially the growing of the grapes that go into the world-famous Chianti and "Super Tuscan" wines. Olive oil production is another staple of the local economy. Extra virgin Tuscan olive oil is highly prized for its delicate flavor, as opposed to the stronger, thicker olive oils of the south. Truffle harvesting is a distinguishing feature of local food production. Both black and white truffles are hunted in Chianti. The region is also noted for its meat. The Cinta Senese pig is unique to this region and produces pork of superior quality. Wild game is a common feature on local menus, including rabbit, pigeon, venison, and, especially, cinghiale (wild boar). Greve is home to one of Italy's oldest and most renowned butcher shops, the Macelleria Falorni.
Due largely to this intense agricultural activity, and the wine and food production industries that have been built on top of it, since early medieval times, Greve evolved as the principal market town at the center of an (increasingly) densely populated area with an abundance of villages, parish churches, villas and castles. The latter were built mostly by the rich merchants and noble classes of Florence who enjoyed the country life, and developed their estates to earn additional income and also to supply their in-town tables.
The town of Greve's busy quaintness and the lushness and diversity of the undulating landscape which surrounds it, have long attracted tourists and travelers. The current flow of tourism to the area and the purchase of homes by both Italians and foreigners, is fully integrated with viniculture, wine-making and various related enterprises to form a highly integrated and highly productive local economy.

After a rich wine tasting will drive to SAN GIMIGNANO

NOTICE: Depending on the availability of the winery the tour can be made SAN GIMIGNANO in the morning and CHIANTI in the afternoon.