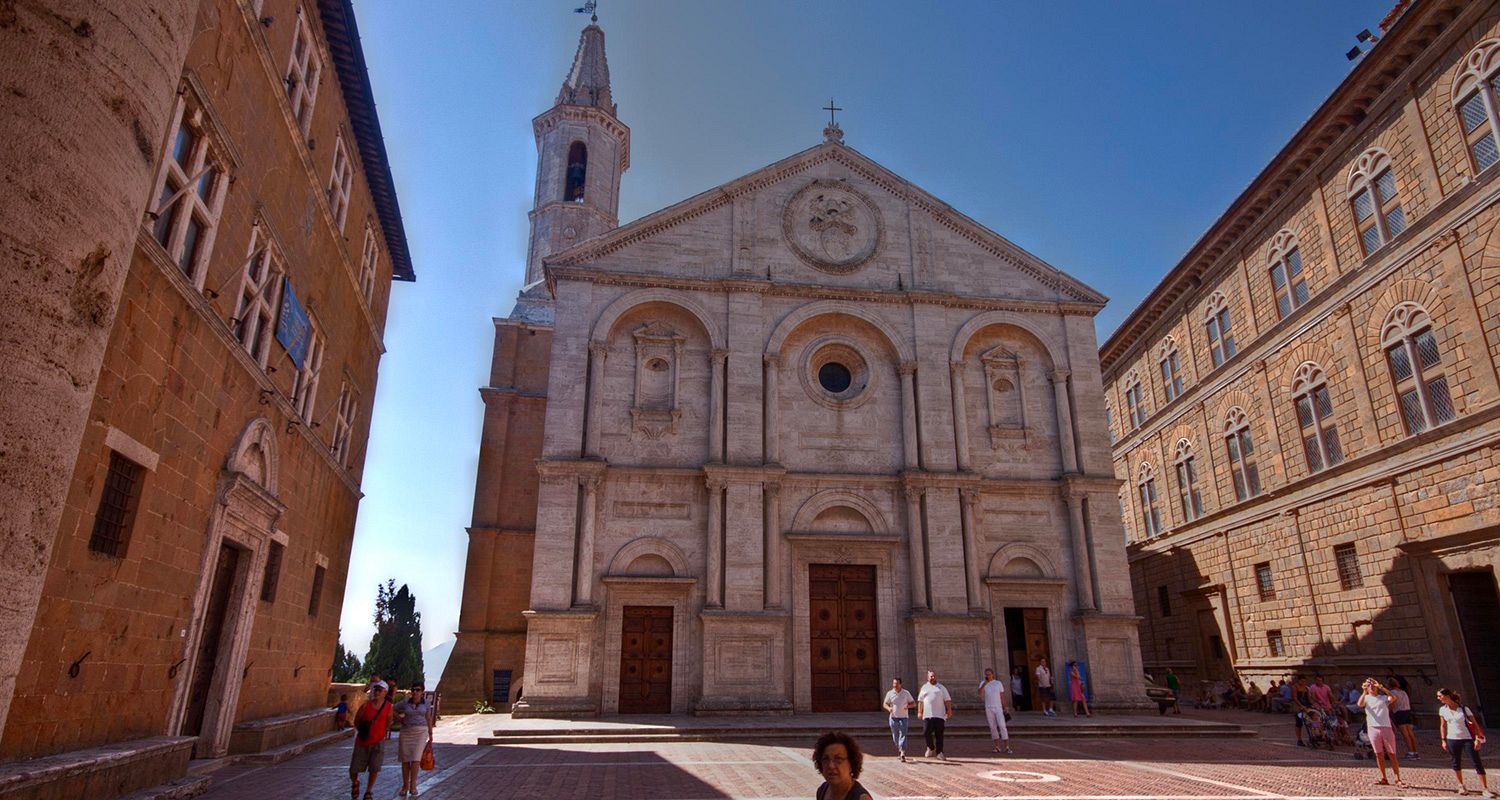 Your driver will pick you up at your hotel
or apartment in FLORENCE
and he'll drive you to PIENZA.

Pienza was rebuilt from a village called Corsignano, which was the birthplace (1405) of Aeneas Silvius Piccolomini (Italian: Enea Silvio Piccolomini), a Renaissance humanist born into an exiled Sienese family, who later became Pope Pius II. Once he became Pope, Piccolomini had the entire village rebuilt as an ideal Renaissance town. Intended as a retreat from Rome, it represents the first application of humanist urban planning concepts, creating an impetus for planning that was adopted in other Italian towns and cities and eventually spread to other European centers. The rebuilding was done by Florentine architect Bernardo Gambarelli (known as Bernardo Rossellino) who may have worked with the humanist and architect Leon Battista Alberti, though there are no documents to prove it for sure. Alberti was in the employ of the Papal Curia at the time and served as an advisor to Pius. Construction started about 1459. Pope Pius II consecrated the Duomo on August 29, 1462, during his long summer visit. His included a detailed description of the structures in his Commentaries, written during the last two years of his life.

The Piccolomini gardens and Val d'Orcia.

The trapezoidal-shaped piazza is defined by four buildings. The principal residence, Palazzo Piccolomini, is on the west side. It has three stories, articulated by pilasters and entablature courses, with a window set within each bay. This structure is similar to Alberti's Palazzo Rucellai in Florence and other later palaces. Noteworthy is the internal court of the palazzo. The back of the palace, to the south, is defined by loggias on all three floors that overlook an enclosed giardino all'Italiana and spectacular views into the distant landscape of the Val d'Orcia.

The Duomo (Cathedral), which dominates the center of the piazza, has a façade that is one of the earliest designed in the Renaissance manner. Though the tripartite division is conventional, the use of pilasters and of columns, standing on high dados and linked by arches, was novel for the time. The bell tower, however, has a Germanic flavor as is the layout of the Hallenkirche plan, a "triple-nave" plan where the side aisles are almost as tall as the nave; Pius, before he became pope, served many years in Germany and praised the effects of light admitted into the German hall churches in his Commentari.[2] Artworks in the duomo include five altar paintings from the Sienese School. The Baptistry, dedicated as usual to San Giovanni, is located next to the apse of the church.

Pius encouraged his cardinals to build palazzi to complete the city. The Palazzo Borgia, on the third side of the piazza, was built as the palace to house the bishops who would travel to Pienza to attend the pope. It is now home to the Diocesan Museum, and the Museo della Cattedrale. The collection includes local textile work as well as religious artifacts. Paintings include a 7th century painting of Christ on the Cross (La Croce), 14th century works by Pietro Lorenzetti (Madonna with Child) and Bartolo di Fredi (Madonna della Misericordia). There are also important works from the 14th and 15th centuries, including a Madonna attributed to Luca Signorelli. Tourists in Pienza.

Across from the church is the town hall, or Palazzo Comunale. Since Corsigniano was originally a village without a town governance, before the transformations there was no town hall. But when Corsigniano was given the status of an official city, a Palazzo Comunale was required, though it was certainly more for show than anything else. It has a loggia on the ground floor and council chamber above; a third floor was added in 1599 (Mack 1987). It also has a brick bell tower that is, however, shorter than its religious counterpart, to symbolize the superior power of the church. The Palazzo Comunale was probably also designed by Rossellino.
The travertine well in the Piazza carries the Piccolomini family crest, and was widely copied in Tuscany during the following century.

After the visit to CORTONA we'll drive to SIENA

You'll be able to have lunch as you prefer in PIENZA or in SIENA.

Once in Siena you'll immediately notice an ancient and mysterious atmosphere floating through the little, narrow streets and squares. You'll feel as if you've stepped backwards in time. Draped on its three hills, Siena is a very beautiful city to visit, a flamboyant medieval ensemble of places and towers cast in warm, brown, Siena-coloured bricks.
Siena, like other Tuscan hill towns, was first settled in the time of the Etruscans (c. 900 BC to 400 BC) when it was inhabited by a tribe called the Saina. The Etruscans were an advanced people who changed the face of central Italy through their use of irrigation to reclaim previously unfarmable land, and their custom of building their settlements in well-defended hill-forts. Then, at the time of the Emperor Augustus, a Roman town called Saena Julia was founded in the site. The first document mentioning dates from 70 AD. Siena may then have been under the control of invading Gaulish forces - who are known to have sacked Rome in 390 BC. Some archaeologists assert it was controlled for a period by a Gaulish tribe called the Saenones.
The Roman origin accounts for the town's emblem - a she-wolf suckling the infants Romulus and Remus. According to legend, Siena was founded by Senius, son of Remus, who was in turn the brother of Romulus, after whom Rome was named. Statues and other artwork depicting a she-wolf suckling the young twins Romulus and Remus can be seen all over the city of Siena. Other etymologies derive the name from the Etruscan family name "Saina", the Roman family name of the "Saenii", or the Latin word "senex" ("old") or the derived form "seneo", "to be old".
Its soaring skyline is its pride, dominated by the gothic cathedral (Duomo) and the taut needle of the Torre del Mangia and yet the shell shaped Piazza del Campo, probably captures the most attention and fame. It has been seen in films, photographs, and advertising campaigns. The bricks cover the sweetly sloping land underneath and are witness to many events in history, but the most intriguing is the "Palio" horserace, one of the most important things in the life of a Siena native. In the piazza on 2 July and 16 August there is a bareback horse race that was first recorded in 1283, but may have had its origins in Roman military training. On those days mayhem takes over this small town and non-natives can observe local patriotism at its best and worst. Any and everything will be done passionately to bring home the prize. The prize is the "Palio," a banner to be shown off with pride for the whole neighborhood it represents. The duomo (1136 - 1382) is one of the most spectacular in ITALY and one of the few to have been built south of the Alps in full gothic style. In 1339, the Sienese decided to build a new nave to the south with the aim of making the biggest church in Christendom. This plan come to nothing when plague hit the city, killing off much of the population. The uncompleted nave now contains a museum of Gothic sculpture.