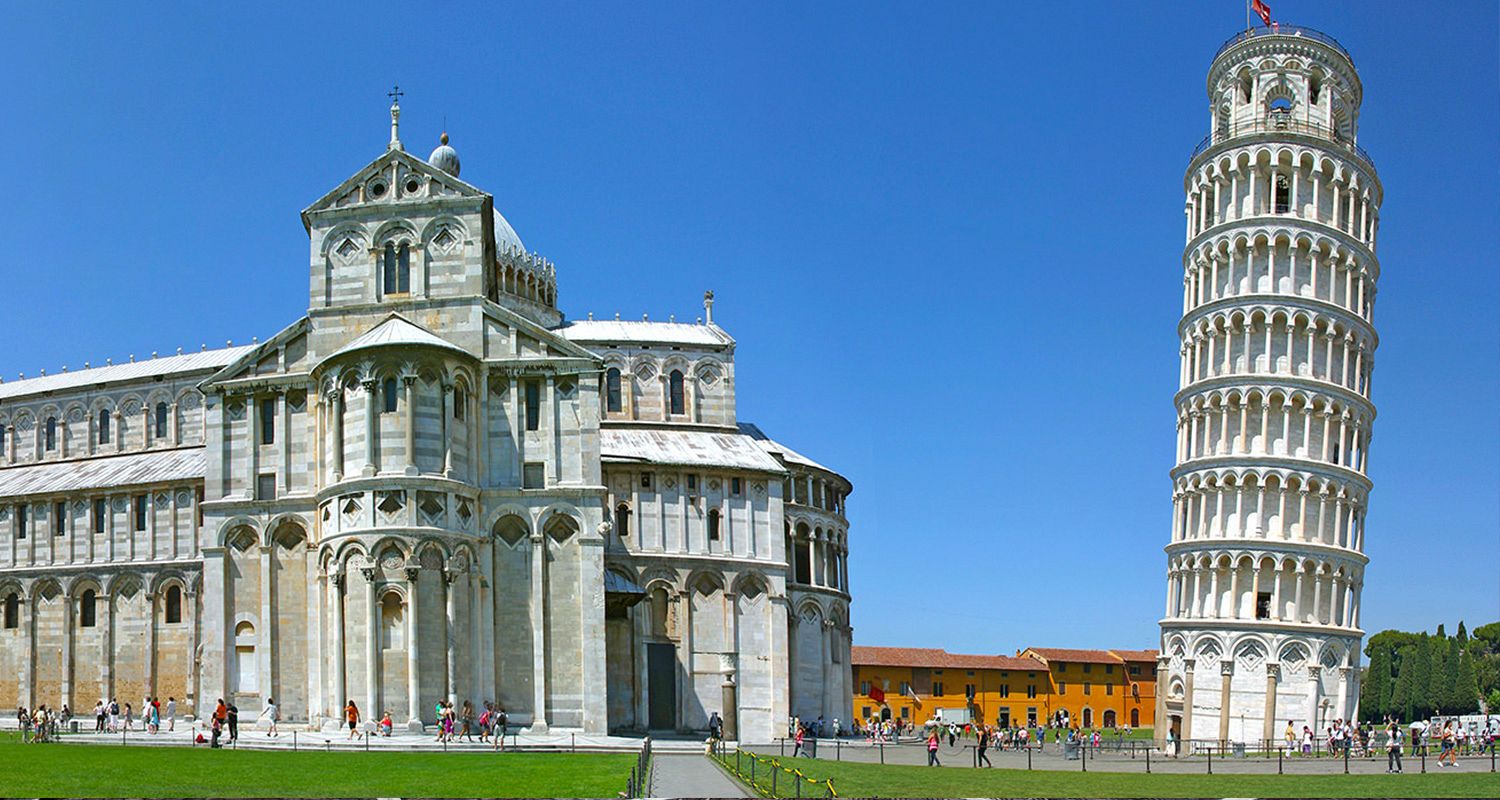 This tour is built for the travelers
who want to see as much as possible in a short time.

Our driver will pick you up at your hotel
or apartment in FLORENCE to drive you in PISA.

Pisa is at once the best known and the most mysterious of TUSCAN CITIES. Its most celebrated monument (THE LEANING TOWER) has become, along with the COLOSSEUM, gondolas and spaghetti a symbol for the entire ITALIAN REPUBBLIC.
Pisa's origins are unknown. The city lies at the junction of two rivers, Arno and Auser (now disappeared) in the Ligurian Sea forming a laguna area. The Pelasgi, the Greeks, the Etruscans and the Ligurians have variously been proposed as founders of the city. Archeological remains from the 5th century BC confirm the existence of a city at the sea, trading with Greeks and Gauls. The presence of an Etruscan necropolis was discovered during excavations in the Arena Garibaldi in 1991. From the 11th to the 13th century, PISA's powerful navy ensured the city's dominance in the western Mediterranean. Trading links with SPAIN and NORTH AFRICA led to a scientific and cultural revolution reflected in the splendid buildings at the era:

DUOMO, BAPTISTRY and THE CAMPANILE (BELL TOWER).
Pisa's decline was assured when the ARNO began to silt up. Salt marsh, partly a nature reserve now divides the city from the sea.

The Leaning Tower of Pisa (Italian: Torre pendente di Pisa) or simply The Tower of Pisa (La Torre di Pisa) is the campanile, or freestanding bell tower, of the cathedral of the Italian city of Pisa. It is situated behind the Cathedral and it is the third structure by time in Pisa's Piazza del Duomo (Cathedral Square).
Although intended to stand vertically, the tower began leaning to the southeast soon after the onset of construction in 1173 due to a poorly laid foundation and loose substrate that has allowed the foundation to shift direction. building: the 13th century square tower at Suurhusen and the nearby 14th century bell tower in the town of Bad Frankenhausen (Sunday Telegraph no 2,406- 22nd July The height of the tower is 55.86 m (183.27 ft) from the ground on the lowest side and 56.70 m (186.02 ft) on the highest side. The width of the walls at the base is 4.09 m (13.42 ft) and at the top 2.48 m (8.14 ft). Its weight is estimated at 14,500 tonnes. The tower has 296 or 294 steps ;the seventh floor has two less steps on the north-facing staircase. The tower leans at an angle of 3.97 degrees. This means that the top of the tower is 3.9 meters from where it would stand if the tower were perfectly vertical.

In PISA our drivers can drive you in the FIELD OF MIRACLES
where you can visit THE DUOMO, THE BAPTISTRY,
THE LEANING TOWER, CAMPOSANTO.
You can visit also PIAZZA DEI CAVALIERI with its beautiful buildings.

San Gimignano was founded as a small village in the 3rd century BC by the Etruscans. Historical records begin in the 10th century, when it adopted the name of the bishop Saint Geminianus, who had defended it from Attila's Huns.
In the Middle Ages and Renaissance era, it was a stopping point for Catholic pilgrims on their way to Rome and the Vatican, as it sits on the medieval Via Francigena. The city's development also was improved by the trade of agricultural products from the fertile neighbouring hills.
In 1199, during the period of its highest splendour, the city made itself independent from the bishops of Volterra. Divisions between Guelphs and Ghibellines troubled the inner life of the commune, which nonetheless, still managed to embellish itself with artworks and architectures.
Saint Fina, known also as Seraphina and Serafina, was a thirteenth century Italian saint born in San Gimignano during 1238. Since Saint Fina died on March 12, 1253 her feast day became March 12. Her major shrine is in San Gimignano and the house said to be her home still stands in the town.
On May 8, 1300, San Gimignano hosted Dante Alighieri in his role of ambassador of the Guelph League in Tuscany.
The city flourished until 1348, when the plague that affected all of Europe, compelled it to submit to Florence. San Gimignano became a secondary centre until the nineteenth century, when its status as a touristic and artistic resort began to be recognized. While in other cities, such as Bologna or Florence, most or all of their towers have been brought down due to wars, catastrophes, or urban renewal, San Gimignano has managed to conserve fourteen towers of varying height which have become its international symbol.
There are many churches in the town: the two main ones are the Collegiata, formerly a cathedral, and Sant'Agostino, housing a wide representation of artworks from some of the main Italian renaissance artists.
The Communal Palace, once seat of the podestà, is currently home of the Town Gallery, with works by Pinturicchio, Benozzo Gozzoli, Filippino Lippi, Domenico di Michelino, Pier Francesco Fiorentino, and others. From Dante's Hall in the palace, access may be made to a Majesty fresco by Lippo Memmi, as well as the Torre del Podestà or Torre Grossa, 1311, which stands fifty-four meters high.
The heart of the town contains the four squares, Piazza della Cisterna, Piazza Duomo where the Collegiata is located, Piazza Pecori, and Piazza delle Erbe. The main streets are Via San Matteo and Via San Giovanni, which cross the city from north to south.

iena, like other Tuscan hill towns, was first settled in the time of the Etruscans (c. 900 BC to 400 BC) when it was inhabited by a tribe called the Saina. The Etruscans were an advanced people who changed the face of central Italy through their use of irrigation to reclaim previously unfarmable land, and their custom of building their settlements in well-defended hill-forts. Then, at the time of the Emperor Augustus, a Roman town called Saena Julia was founded in the site. The first document mentioning dates from 70 AD. Siena may then have been under the control of invading Gaulish forces – who are known to have sacked Rome in 390 BC. Some archaeologists assert it was controlled for a period by a Gaulish tribe called the Saenones. The Roman origin accounts for the town's emblem – a she-wolf suckling the infants Romulus and Remus. According to legend, Siena was founded by Senius, son of Remus, who was in turn the brother of Romulus, after whom Rome was named. Statues and other artwork depicting a she-wolf suckling the young twins Romulus and Remus can be seen all over the city of Siena. Other etymologies derive the name from the Etruscan family name "Saina", the Roman family name of the "Saenii", or the Latin word "senex" ("old") or the derived form "seneo", "to be old".
Its soaring skyline is its pride, dominated by the gothic cathedral (Duomo) and the taut needle of the Torre del Mangia and yet the shell shaped Piazza del Campo, probably captures the most attention and fame. It has been seen in films, photographs, and advertising campaigns. The bricks cover the sweetly sloping land underneath and are witness to many events in history, but the most intriguing is the "Palio" horserace, one of the most important things in the life of a Siena native. In the piazza on 2 July and 16 August there is a bareback horse race that was first recorded in 1283, but may have had its origins in Roman military training. On those days mayhem takes over this small town and non-natives can observe local patriotism at its best and worst. Any and everything will be done passionately to bring home the prize. The prize is the "Palio," a banner to be shown off with pride for the whole neighborhood it represents. The duomo (1136 - 1382) is one of the most spectacular in ITALY and one of the few to have been built south of the Alps in full gothic style. In 1339, the Sienese decided to build a new nave to the south with the aim of making the biggest church in Christendom. This plan come to nothing when plague hit the city, killing off much of the population. The uncompleted nave now contains a museum of Gothic sculpture.

Back to FLORENCE late afternoon.