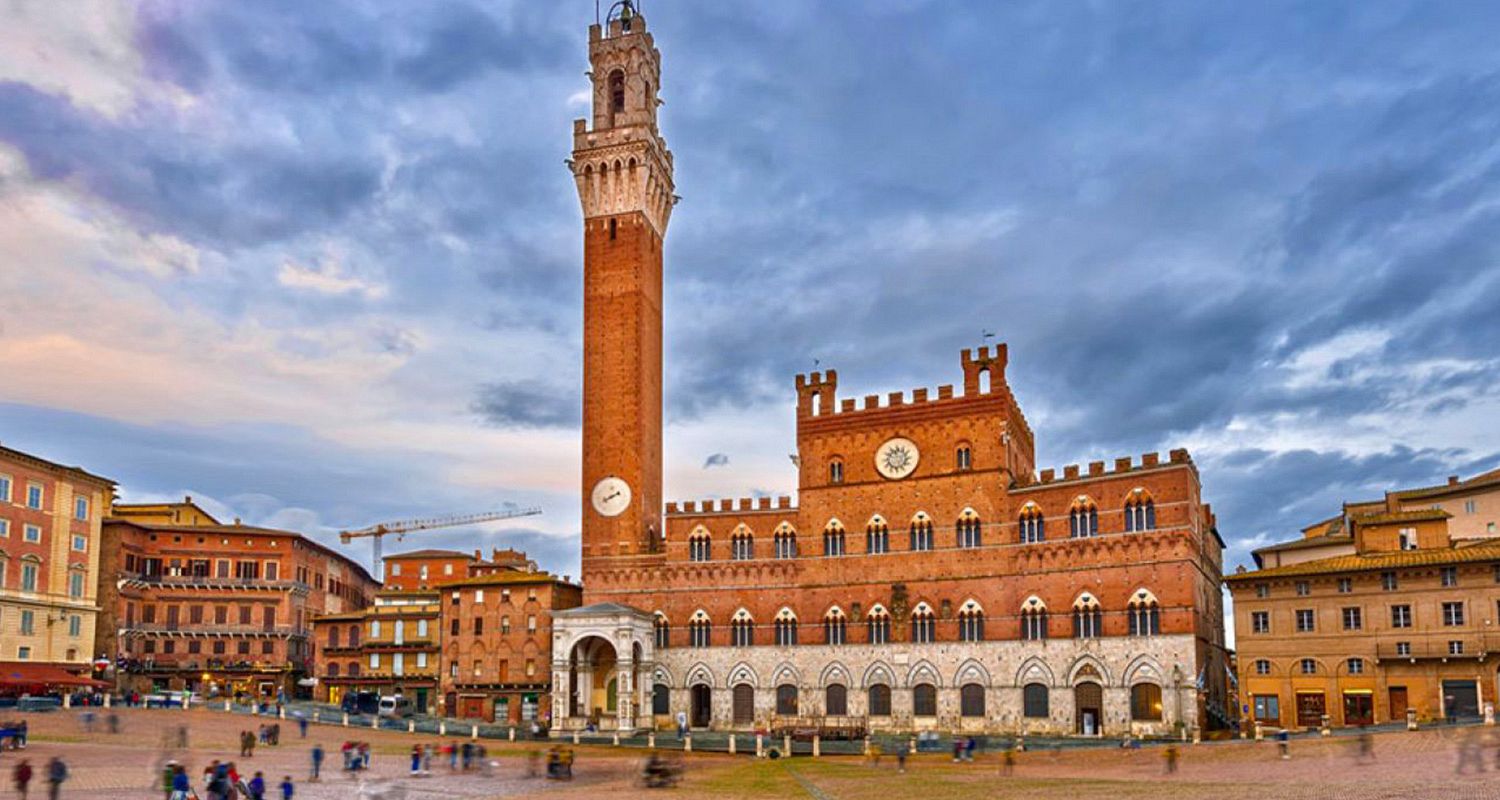 After San Gimignano we'll proceed to SIENA with a stop in MONTERIGGIONI.

Except for some work done in the 16th century, very little work has been done to Monteriggioni's walls or buildings since they were first erected. So, Monteriggioni's walls and the buildings that make up the town within are the best preserved example of their kind in all of Italy, so it is not surprising that it attracts busses full of tourists, but also architects, and medieval historians and archaeologists.
The town served as a defensive fortification that played a vital role in the on-going conflicts between Siena and Florence during the Middle Ages when Florence was driving hard to increase its territory. Over the years, Monteriggioni successfully withstood many attacks from the Fiorentini and a few from forces under the command of the Bishop of Volterra which also asserted dominion over the area).
What Florence could not do by force, it ultimately achieved by guile. The Sienese had placed control of the town's garrison in the hands of Giovannino Zeti, who had been exiled from Florence. Reconciling with the Medicis in 1554, in what is known in Monteriggioni as the "great betrayal", he simply handed the keys of the town over to the Medicean forces.
The more or less circular walls with a total length of about 570 meters were built between 1213 and 1219, following the natural contours of the hill. There are fourteen towers on square bases set at equidistance, and two portals or gates. One gate, the Porta Fiorentina opens toward Florence to the north, and the other, the Porta Romana, faces Rome to the south. The main street within the walls connects the two gates in a more or less straight line.
The main piazza, the Piazza Roma, is dominated by a Romanesque church with a simple, plain facade. Other houses, some in the Renaissance style, once owned by local nobles, gentry and wealthy merchants facing into the piazza. Off the main piazza smaller streets give way to public gardens fronted by the other houses and small businesses of the town. Back in more hostile times, these gardens provided vital sustenance when enemies gathered without.
The Tuscan poet Dante used the turrets of Monterrigioni to evoke the sight of the ring of giants encircling the Infernal abyss.
Once in Siena you'll immediately notice an ancient and mysterious atmosphere floating through the little, narrow streets and squares. You'll feel as if you've stepped backwards in time. Draped on its three hills, Siena is a very beautiful city to visit, a flamboyant medieval ensemble of places and towers cast in warm, brown, Siena-coloured bricks.
Its soaring skyline is its pride, dominated by the gothic cathedral (Duomo) and the taut needle of the Torre del Mangia and yet the shell shaped Piazza del Campo, probably captures the most attention and fame. It has been seen in films, photographs, and advertising campaigns. The bricks cover the sweetly sloping land underneath and are witness to many events in history, but the most intriguing is the "Palio" horserace, one of the most important things in the life of a Siena native. In the piazza on 2 July and 16 August there is a bareback horse race that was first recorded in 1283, but may have had its origins in Roman military training. On those days mayhem takes over this small town and non-natives can observe local patriotism at its best and worst. Any and everything will be done passionately to bring home the prize.
The prize is the "Palio," a banner to be shown off with pride for the whole neighborhood it represents. The duomo (1136 - 1382) is one of the most spectacular in ITALY and one of the few to have been built south of the Alps in full gothic style. In 1339, the Sienese decided to build a new nave to the south with the aim of making the biggest church in Christendom. This plan come to nothing when plague hit the city, killing off much of the population. The uncompleted nave now contains a museum of Gothic sculpture.