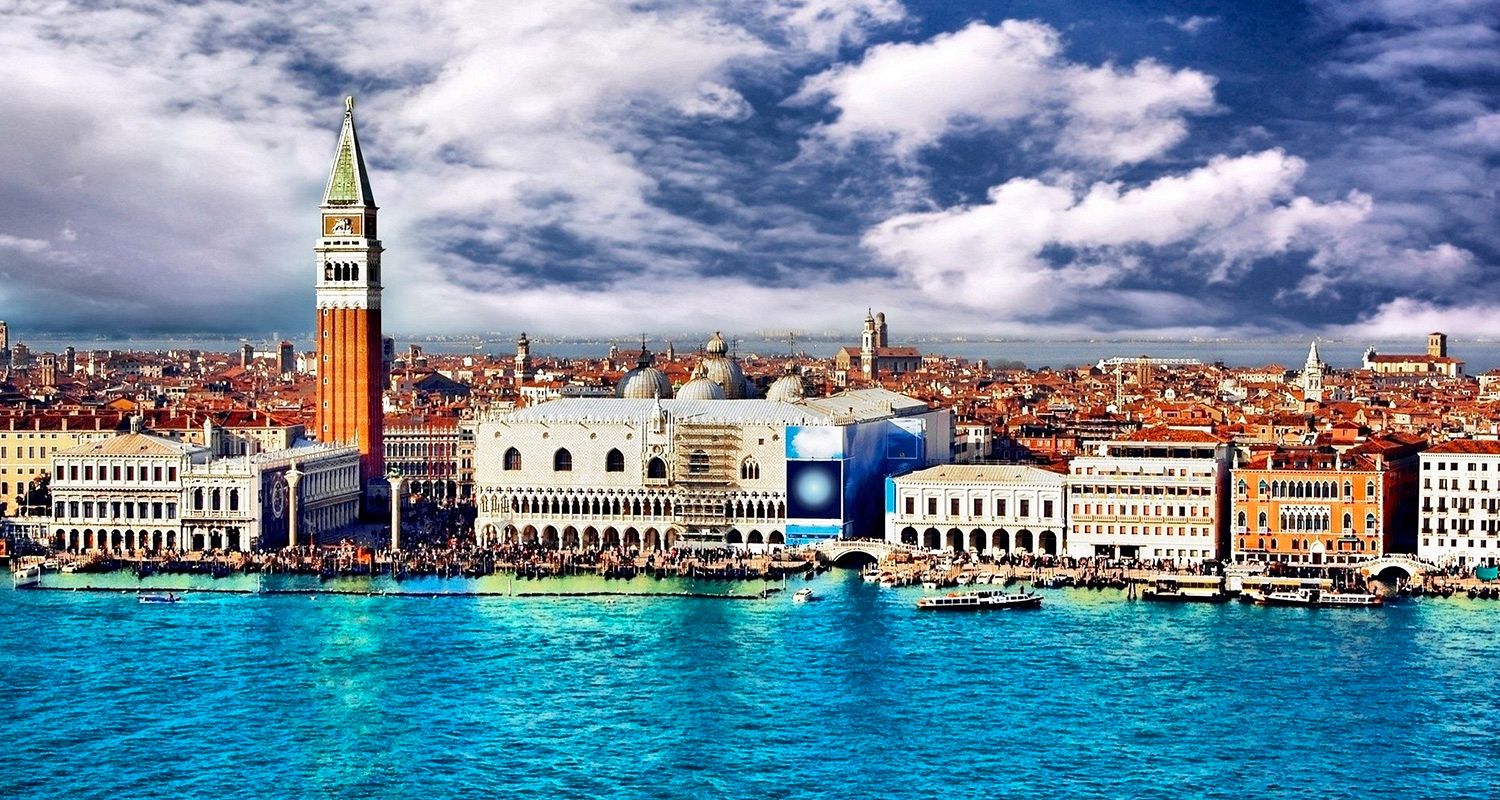 Venice (Italian: Venezia, Venetian: Venezsia) is a city in northern Italy, the capital of region Veneto, and has a population of 271,251 (census estimate January 1, 2004). Together with Padua, the city is included in the Padua-Venice Metropolitan Area (population 1,600,000). Venice has been known as the "Queen of the Adriatic", "City of Water", "City of Bridges", and "The City of Light".
The city stretches across 110 small islands in the marshy Venetian Lagoon along the Adriatic Sea in northeast Italy. The saltwater lagoon stretches along the shoreline between the mouths of the Po (south) and the Piave (north) Rivers. The population estimate of 272,000 inhabitants includes the population of the whole Comune of Venezia; around 62,000 in the historic city of Venice (Centro storico); 176,000 in Terraferma (the Mainland), mostly in the large frazione of Mestre and Marghera; and 31,000 live on other islands in the lagoon.
The Venetian Republic was a major maritime power during the Middle Ages and Renaissance, and a staging area for the Crusades and the Battle of Lepanto, as well as a very important center of commerce (especially silk, grain and spice trade) and art in the 13th century up to the end of the 17th century.
Venice is a very beautiful, unique city with its canals, calli (narrow streets) and small islands in the LAGUNA.
The city's most important thoroughfare is four kilometres long with a maximum depth of 5 metres, and has three bridges (SCALZI, RIALTO AND ACCADEMIA). There is nothing more exciting than a boat ride down the GRAND CANAL, lined with over 200 historical palazzi.
Venice is world-famous for its canals. It is built on an archipelago of 118 islands formed by about 150 canals in a shallow lagoon. The islands on which the city is built are connected by about 400 bridges. In the old center, the canals serve the function of roads, and every form of transport is on water or on foot. In the 19th century a causeway to the mainland brought a railway station to Venice, and an automobile causeway and parking lot was added in the 20th century. Beyond these land entrances at the northern edge of the city, transportation within the city remains, as it was in centuries past, entirely on water or on foot. Venice is Europe's largest urban car free area, unique in Europe in remaining a sizable functioning city in the 21st century entirely without motorcars or trucks.
The classical Venetian boat is the gondola, although it is now mostly used for tourists, or for weddings, funerals, or other ceremonies. Most Venetians now travel by motorised waterbuses (vaporetti) which ply regular routes along the major canals and between the city's islands. The city also has many private boats. The only gondolas still in common use by Venetians are the traghetti, foot passenger ferries crossing the Grand Canal at certain points without bridges.
Azienda Consorzio Trasporti Veneziano (ACTV) is the name of the public transport system in Venice. It combines both land transportation, with buses, and canal travel, with water buses (vaporetti). In total, there are 25 routes which connect the city.
You'll arrive at ST. MARK'S square that is Europe's most elegant "drawing room" lined with great monuments such as ST. MARK'S, THE DOGE'S PALACE and the PROCURATIE, as well as with boutiques and chic cafès with orchestras. (CAFE' FLORIAN the most famous). The GALLERIA DELL'ACCADEMIA is a very important museum with a large collection of 14th - 15th Venetian paintings.

The colony on TORCELLO island was founded in 5th century and before the growth of the VENETIAN Republic it had a population of 20.000. Today you can admire the Byzantine BASILICA of SANTA MARIA ASSUNTA (11th century).
MURANO is the centre of the glassmaking industry.
BURANO with its brightly painted houses is the most colourful of the lagoon islands.
The local lacemaker's school is extremly interesting, so while in MURANO you can buy glass products in BURANO you can purchase very nice laces.

We can book for you a professional guide for a walking tour (not included).

At the end of your visit our car we'll wait for you in PIAZZALE ROMA
for going back to FLORENCE.