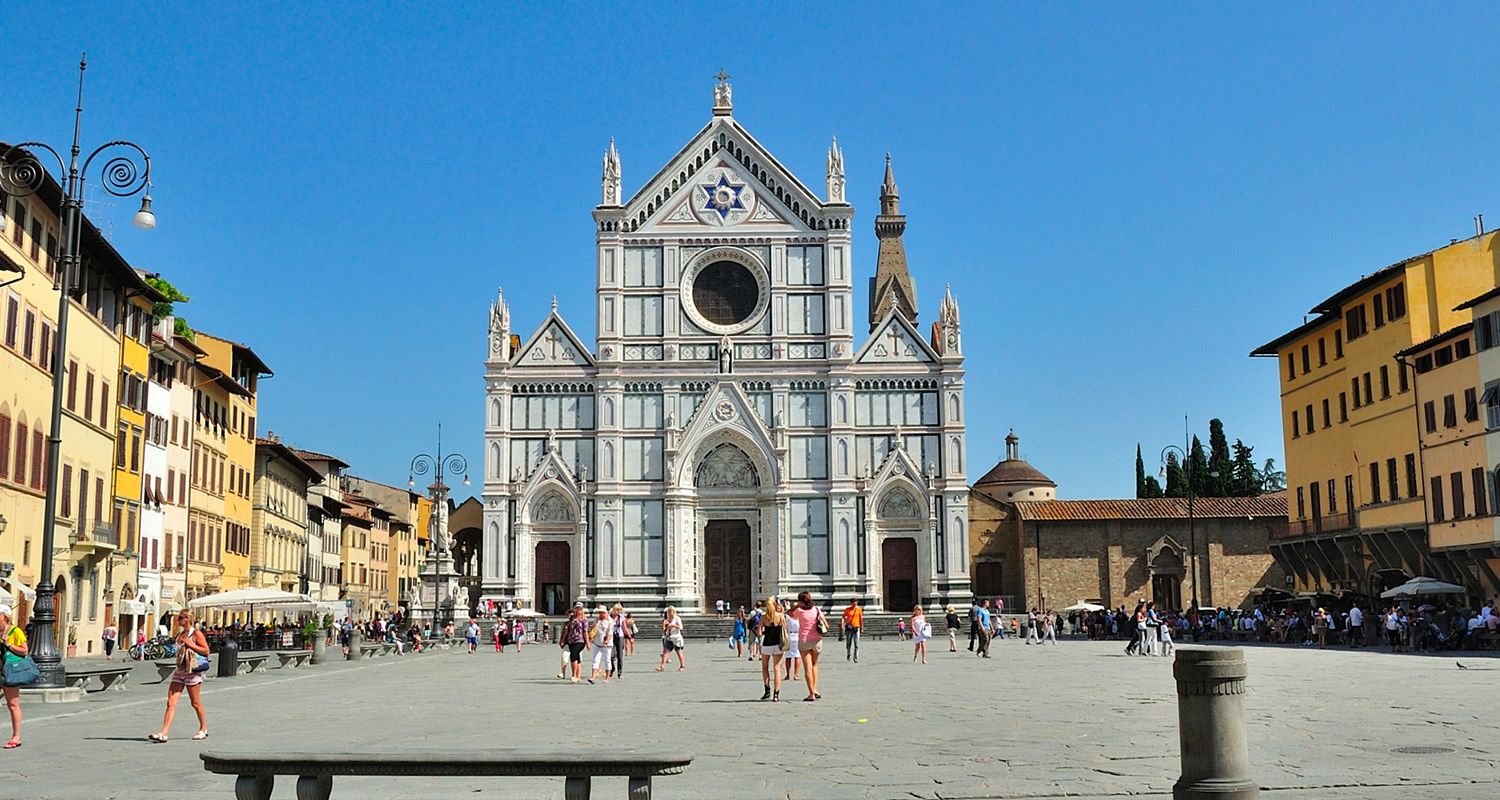 Your driver will pick you up at your hotel or apartment in FLORENCE and he’ll drive you to PIAZZALE MICHELANGIOLO, from where you can have the best view of FLORENCE.

After that he’ll drive you to the historical city center.
Florence was the cradle of Renaissance culture. Through the patronage of the Medici court, the city became the home of artists and people of letters. It was certainly the cultural reference point of the 15th and 16th centuries.

The Basilica is the largest Franciscan church in the world. Its most notable features are its sixteen chapels, many of them decorated with frescoes by Giotto and his pupils, and its tombs and cenotaphs.
Legend says that Santa Croce was founded by St Francis himself. The construction of the current church, to replace an older building, was begun on 12th May 1294, possibly by Arnolfo di Cambio, and paid for by some of the city's wealthiest families. It was consecrated in 1442 by Pope Eugene IV. The building's design reflects the austere approach of the Franciscans. The floorplan is an Egyptian or Tau cross (a symbol of St Francis), 115 metres in length with a nave and two aisles separated by lines of octagonal columns. To the south of the church was a convent, some of whose buildings remain.
In the Primo Chiostro, the main cloister, there is the Cappella dei Pazzi, built as the chapter house between 1442 and 1446 and finally completed in the 1470s. Filippo Brunelleschi (who had designed and executed the dome of the Duomo) was involved in its design which has remained rigorously simple and unadorned.
In 1560, the choir screen was removed as part of changes arising from the Counter-Reformation and the interior rebuilt by Giorgio Vasari. As a result, there was damage to the church's decoration and most of the altars previously located on the screen were lost.
The campanile was built in 1842, replacing an earlier one damaged by lightning. The neo-Gothic marble façade, by Nicolò Matas, dates from 1857-1863.
In 1866, the complex became public property, as a part of government suppression of most religious houses, following the wars that gained Italian independence and unity.
The Museo dell'Opera di Santa Croce is housed mainly in the refectory, also off the cloister. A monument to Florence Nightingale stands in the cloister, in the city in which she was born and after which she was named. Brunelleschi also built the inner cloister, completed in 1453.
In 1966, the Arno River flooded much of Florence, including Santa Croce. The water entered the church bringing mud, pollution and heating oil. The damage to buildings and art treasures was severe, taking several decades to repair.
Today the former dormitory of the Franciscan Friars houses the Scuola del Cuoio (Leather School). Visitors can watch as artisans craft purses, wallets, and other leather goods which are sold in the adjacent shop.
During the 13th and 14th centuries, a number of illustrious people were recognized in every endeavor. Giotto, Cimabue, Arnolfo di Cambio and Orcagna left behind their masterpieces in the city of Lily. These provided a model for the entire world of Tuscan and Italian art. You will start your visit at Santa Maria del Fiore, the masterpiece of Filippo Brunelleschi, who built it between 1420 and 1434.
The original project of the Cathedral was the work of Arnolfo di Cambio, who began its construction in 1296.
Piazza della Signoria will be a short ride from the Church. It was the Medieval town planners who were responsible for the development of the historic city center of Florence.
Palazzo della Signoria, also known as Palazzo Vecchio, situated on a corner of the Piazza itself, was initially built as the seat of the Priori delle Arti, the heads of guilds. It was subsequently deemed to be the seat of the Medici government by Cosimo I.
We'll then reach the Ponte Vecchio, one of the most famous bridges in the world and the most ancient in Florence. It has existed since the 10th century, although the original structure was destroyed by a flood of the Arno River in 1333.
Your guide-driver will also take you to Filippo Brunelleschi's Palazzo Pitti. It is the largest and most monumental of the palaces in Florence. Historically, the Uffizi Museum building is a typically 16th century scenographic conception.
Vasari designed this building in 1560 for Cosimo I.